Private excursions on the Amalfi Coast 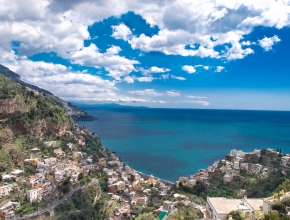 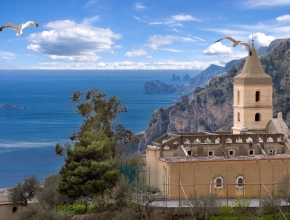 About the Amalfi coast

It is one of the world's most beautiful spectacular and breathtaking coast line overhanging the sea.
It goes from Sorrento to Salerno and in 60 km you can see Positano, Amalfi, Ravello, Minori, Maiori, Conca dei Marini, Cetara, Vietri sul mare e Salerno.
Along the way you can find Emerald grotto, and many china shops. Tour of Italy suggests to visit Piccadilly, at the Emerald grotto, that gives a 10% discount to our clients.

Positano is a small town on the Amalfi Coast, build on the rocks facing the sea. It is a place full of Vip, and a place of fashion, a place known all over the world for the luxurious Hotels, such as Hotel Sirenuse, and Hotel San Pietro, of the latter, the film star Barbara Streisand said "the world most beautiful Hotel". 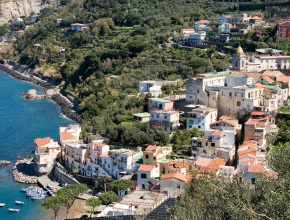 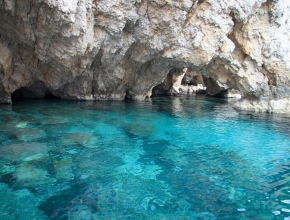 Ravello, the town of the music

Once left Amalfi, going up the hill, for about 6 Km, you get to Ravello. Here Wagner composed the second part of the 'Parsifal' and Byron, had his inspiration too.
In Ravello at Villa Rufolo, every year from June to September, in the evening there are concert of classical music in honour of Wagner. Going up, through a narrow street, you get to Villa Cimbrone, overlooking the bay of Salerno. It is also worth to visit the cathedral, and the crypt. 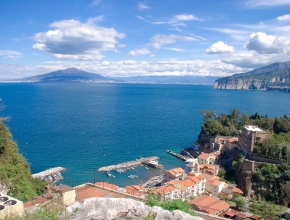 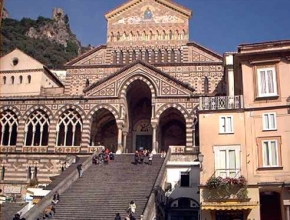 More than 1000 years ago in Italy, there were the so called 'four maritime Republics'. The four republic were represented by Pisa, Genoe, Venice, Amalfi.
Amalfi is the home town of Flavio Gioia who discovered the properties of magnetic field and build the first compass, so in the main square you can see a statue representing the inventor.
Going through two arches you get to the cathedral of Saint Andrea, a masterpiece of Byzantine art. Every 4 years, on 15th August, a Regatta takes place in memory of the 'four Republics'.

Use this form to contact us and/or receive more information. Fill in the obligatory fields (*) and specify your request. Our operator will respond in the shortest time possible.

Fields marked with an asterisk (*) are required

Rome: the magic land of art

Visit the sunny bay of Naples

Discover Tuscany with us

Venice by gondola or on foot

Sorrento: the magic land of Sirens

Our Top Services for your Tours

Enjoy your holidays with us!

Read the opinions of our clients »

Would you like to receive our exclusive special offers or to be updated regularly on news and events? Register for our free newsletter!